It sounds—and sort of looks—like something out of a middle school science experiment, but according to a study done at RIKEN Center for Sustainable Resource Science in Japan, a new and simple way to increase a plant’s drought tolerance is to grow it in vinegar……

The tip of the leaf of a plant senses blue light and signals the plant to grow in the direction of the blue light.

The red glow of a sunset is what signals the plant when it is time to bloom. A plant kept in a dark closet can be signaled to flower with just a short flash of red light.

Plants use both blue and red light to feed themselves but slightly favor red.

Plants appear mostly green because they are reflecting most of the green light that hits them, it doesn’t get used by the plant. 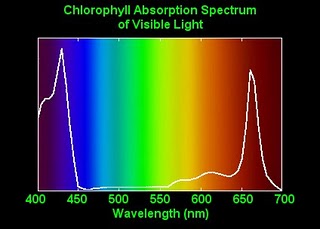 If your plant is not growing well, try adding more blue light. If you’re not getting flowers try more red light. 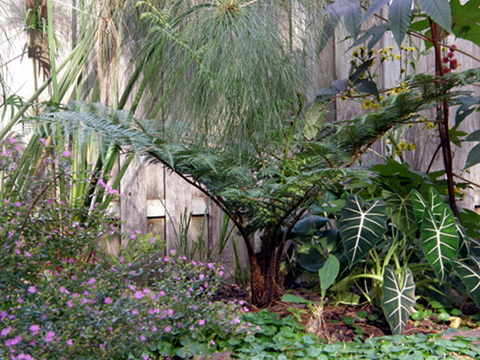 In hot humid climates nitrogen is always in short supply. If you, like me, also use pine mark or other mulches that break down rapidly there is even less nitrogen in the soil.

The plants you bring home to your landscape come from a well fed environment. To help them adjust keep up the fertilizer levels for the first six months. Two years later your plants will be stronger and healthier.

If you just use nitrogen as we often do down here the new plants may develop potassium and magnesium deficiencies. So be sure to use a good all around fertilizer.

The roots of container-grown ornamental plants primarily are concentrated within the original container substrate root ball during the establishment period following transplanting into the landscape. Plants growing in container substrates containing pine bark or peatmoss have higher nitrogen (N) requirements than in most landscape soils due to microbial immobilization of N by these organic components. However, use of high-N fertilizers, such as those used in container production of ornamentals, can cause imbalances with potassium (K) and magnesium (Mg) when used on palms in sandy landscape soils. Areca palm (Dypsis lutescens) and chinese hibiscus (Hibiscus rosa-sinensis ‘President’) that had been growing in containers were transplanted into a landscape soil to determine if high N fertilization during the establishment period could accelerate the rate of establishment without exacerbating K and Mg deficiencies. Although plants of both species had the darkest green color and largest size when continuously fertilized with high N fertilizer, this treatment did induce Mg deficiency in both species. Plant size and color for both species were highly correlated with cumulative N application rates, but also with initial N application rates, suggesting that high N fertilization during the first 6 months affected plant quality at 12 and 24 months after planting, even if high N fertilization was discontinued. However, continued use of a moderate N landscape palm maintenance fertilizer ultimately produced areca palm plants as good as those receiving high N during the establishment period.

Plants grown in soils low in phosphates grow hairy roots in the search for nutrients. Now scientists have discovered the gene that turns on hairy roots and hope to use it to develop food crops that will grow in poor soils or with less fertilizer.

When crops such as barley and wheat are grown on soils containing small amounts of phosphate it is known that those plants with long hairs on their roots give higher yields than those with short hairs. Similarly, long-haired beans grown on the nutrient-poor tropical soils of Central America do much better than short haired varieties.

Root hairs burrow into the soil like tiny ‘mining machines’ releasing acids and other scouring chemicals that crack open rocky minerals releasing valuable nutrients, such as iron and phosphate, that are necessary for plant growth.

Now, for the first time, scientists have found the mechanism that controls the growth of these specialised nutrient-excavating cells. They discovered that a master regulatory gene called RSL4 acts like a switch; hair cells grow when the gene is turned on and growth stops when it is off.

It was believed that molybdenum deficiency in plants was best treated with foliar sprays, in light of the new information you might consider adding to the soil as well.
. . . Until now, scientists had thought that phosphorus was the key element supporting the prodigious expansion of rainforests, according to Lars Hedin, a professor of ecology and evolutionary biology at Princeton University who led the research. But an experiment testing the effects of various elements on test plots in lowland rainforests on the Gigante Peninsula in the Barro Colorado Nature Monument in Panama showed that areas treated with molybdenum withdrew more nitrogen from the atmosphere than other elements.

“We were surprised,” said Hedin, who is also a professor in the Princeton Environmental Institute. “It’s not what we were expecting.”

The report is detailed in the Dec. 7 online edition of Nature Geoscience.

Molybdenum, the team found, is essential for controlling the biological conversion of nitrogen in the atmosphere into natural soil nitrogen fertilizer, which in turn spurs plant growth. “Just like trace amounts of vitamins are essential for human health, this exceedingly rare trace metal is indispensable for the vital function of tropical rainforests in the larger Earth system,” Hedin said. Molybdenum is 10,000 times less abundant than phosphorus and other major nutrients in these ecosystems. . . .Secret ingredient for the health of tropical rainforests discovered ( read more )

It’s mid April, most plants are coming back.

I too have noticed the over sized foliage on all the perennials. I’ve dug and dug and not been able to find anything other than it’s a combination of drought and freezing stress that causes it.  If I find out more I’ll let you all know