Skip to content
March 23, 2019 Posted in General Information, In the news, Plant problems

In the next month or so, orange trees across Florida will erupt in white blossoms, signalling the start of another citrus season. But this year, something different will be blowing in the winds. Farmers are preparing to spray their trees with hundreds of thousands of kilograms of two common antibiotics to combat citrus greening, a bacterial disease that has been killing Florida citrus trees for more than a decade.

The US Environmental Protection Agency (EPA) is in the process of allowing growers to use streptomycin and oxytetracycline as routine treatments, spraying trees several times per year, beginning with the ‘first flush’ of leaves this spring. Growers in the state could end up using as much as 440,000 kilograms of the drugs. Although the compounds, which are both used in human medicine, have been sprayed on other crops in the past and applied in limited amounts to citrus groves, the scale of this application has researchers and public-health advocates alarmed.

“They are doing a huge experiment with limited monitoring,” says Steven Roach, a senior analyst in Iowa City at Keep Antibiotics Working, a coalition of research and advocacy groups that has formally objected to the plan with the EPA.
( read more at Nature ) 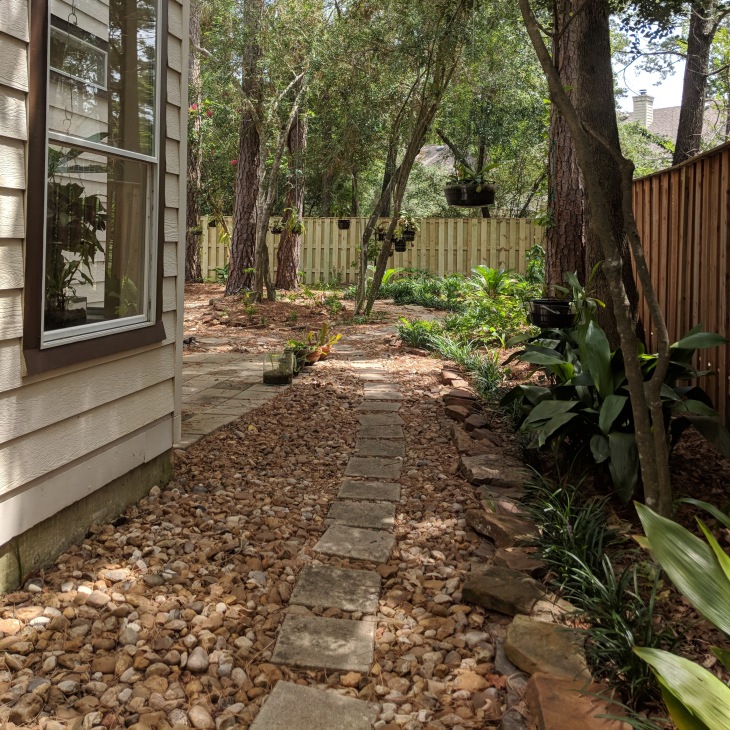 A few years ago I read that the cypress tree swamps were being clear cut for mulch. I haven’t purchased mulch since. In the areas under trees I let the leaves and pine needle accumulate. In the other areas I turned to rock.

A garden with out mulch in Houston is a doomed garden. With out mulch the summer sun will bake every thing to a crisp or a heave downpour will wash away your plants and soil.

Rock mulch builds up heat during the day, slowly releases it at night keeping the soil and plants at more moderate temperatures. It made a noticeable difference during the late frost we had in 2019.

It lets water run through to the soil under the plants and slows evaporation, prevents erosion and most important – it doesn’t need to be replaced every year.

Little did I know that the people on Easter Island used rocks to keep their gardens going as the environment deteriorated. The technical term is Lithic-Mulch, which translates to …. rock mulch.

There are many benefits to rock mulch, more so in dry areas. Previous cultures used it in New Mexico and Arizona. If you’ve live in Houston long you know we switch between decades of drought and decades of downpours. Rock mulch works for both.

Sometimes holes are dug, lined with rocks or small walls built around plants. This protects the plants from strong winds and provides a little shade. Another option is a layer of rocks is placed over the soil the same as is done with mulch.

A taller pile of rocks on the south side of a plant (Talus garlands) can protect young trees or shrubs. The pile of rocks provides shade, condenses water at night to add to soil, keeps weeds under control, keeps critters from digging and provides wind protection.

The annual National Gardening Survey finds the proportion of older gardeners is holding steady (35%) but younger households reached an all-time high in gardening participation. “From small beginnings with a succulent here and a houseplant there, the under 35s are now truly engaged in the full range of gardening activities.” says industry analyst Ian Baldwin, who participated in the survey.

Overall, American gardeners reported spending a record $47.8 billion on lawn and garden retail sales, the highest ever, with a record average household spend of $503 – up nearly $100 over the previous year.

Container gardening and landscaping set new highs in gardening sales, too. “More and more consumers are choosing not to dig holes in their leisure times. If they have the finances, they are investing in raised beds,” says Baldwin.

Indoor gardening is also making a big comeback with 30% of all households buying at least one houseplant. Baldwin says it harkens back to the ‘70’s and ‘80s, “when no home was complete without various sizes and shapes of non-flowering plants in pots or macramé hangers acting as cheap room dividers.”

Cuban brown anole have been moving in and pushing the native green anoles out. If you see any take a few minutes to fill out the survey for the SW Center for Herpetological Research (link below)

The Green Anole, Your Resident Backyard Lizard, Is Being Pushed Out By Its Uglier Cousin