Skip to content
June 1, 2018 Posted in Evolution of plants 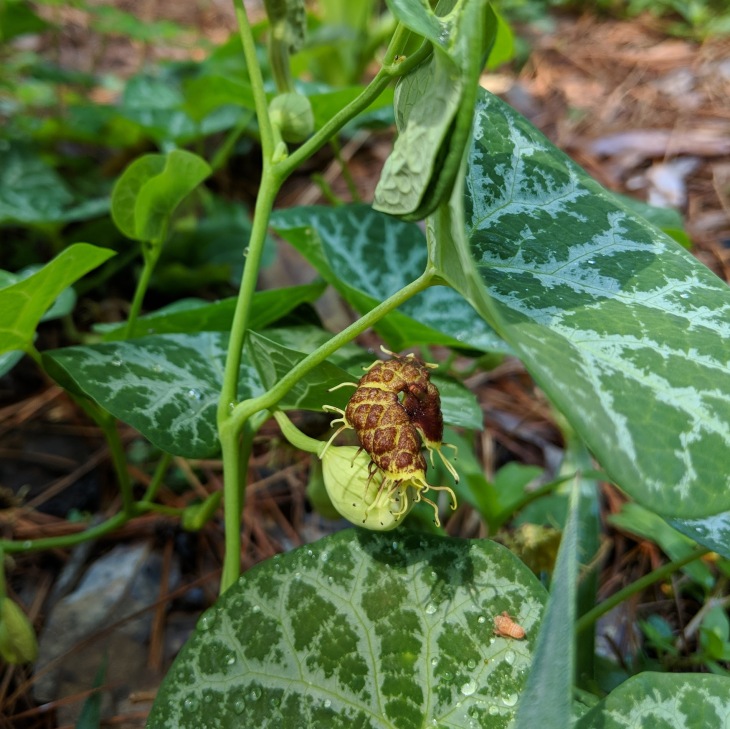 Plants, like all living things, need nitrogen to build amino acids and other essential biomolecules. Although nitrogen is the most abundant element in air, the molecular form of nitrogen found there is largely unreactive. To become useful to plants, that nitrogen must first be “fixed,” or busted out of its molecular form and linked with hydrogen to make ammonia. The plants can then get at it by catalyzing reactions with ammonia.

Some legumes and a few other plants have a symbiotic relationship with certain bacterial species. The plants build specialized structures on their roots called nodules to house and feed the bacteria, which in turn fix nitrogen for the plants and assure them a steady supply of ammonia. Only 10 families of plants have the ability to do this, and even within these families, most genera opt out. Ever since the symbiosis was discovered in 1888, plant geneticists have wondered: why? If you could ensure a steady supply of nitrogen for use, why wouldn’t you? Plants repeatedly got rid of their ability to obtain their own nitrogen 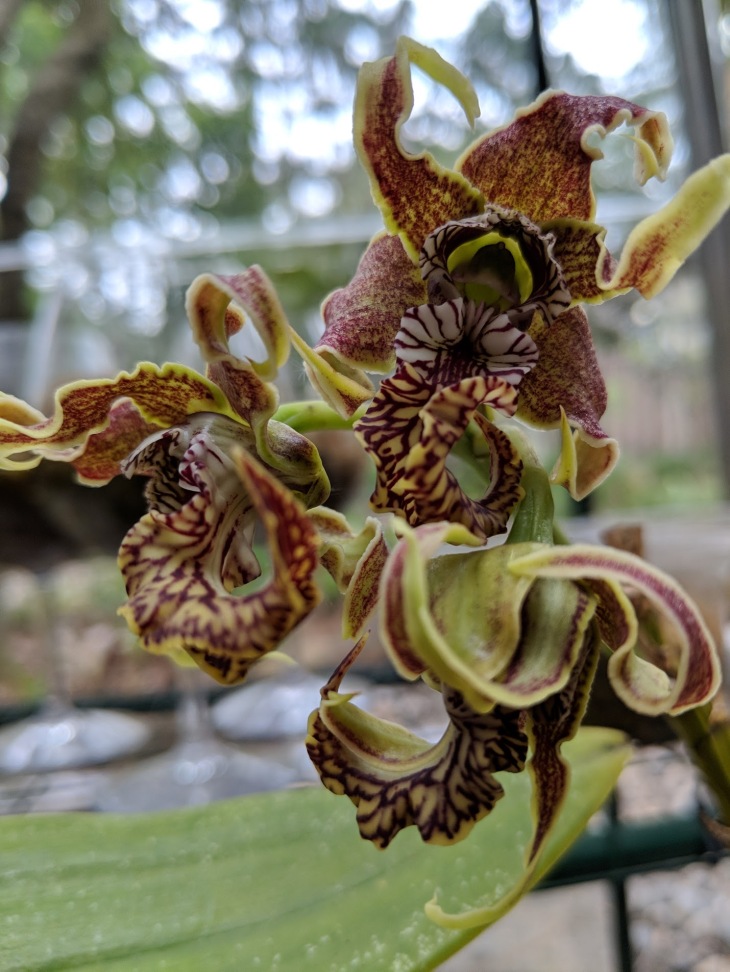 The abrupt origin and rapid diversification of the flowering plants during the Cretaceous has long been considered an “abominable mystery.” While the cause of their high diversity has been attributed largely to coevolution with pollinators and herbivores, their ability to outcompete the previously dominant ferns and gymnosperms has been the subject of many hypotheses. Common among these is that the angiosperms alone developed leaves with smaller, more numerous stomata and more highly branching venation networks that enable higher rates of transpiration, photosynthesis, and growth. Yet, how angiosperms pack their leaves with smaller, more abundant stomata and more veins is unknown but linked—we show—to simple biophysical constraints on cell size. Only angiosperm lineages underwent rapid genome downsizing during the early Cretaceous period, which facilitated the reductions in cell size necessary to pack more veins and stomata into their leaves, effectively bringing actual primary productivity closer to its maximum potential. Thus, the angiosperms’ heightened competitive abilities are due in no small part to genome downsizing.

Scores of plant species are capable of living dormant under the soil for up to 20 years, enabling them to survive through difficult times, a new study has found.

An international team of academics has found that at least 114 plant species from 24 different plant families, from widespread locations and ecological communities around the world, are capable of prolonged dormancy as adult plants, remaining alive in the soil but not emerging from the ground every spring. This behaviour enables them not only to survive through difficult times, but to make the best of adversity. … more

Tree canopies come in two main heights ~82′ and 131′. They form in tropical and temperate regions but only if the yearly rainfall is consistently 59″ or more

Rainforests are among the most charismatic as well as the most endangered ecosystems of the world. However, whereas the effects of climate change on tropical forests resilience is a focus of intense research,the conditions for their equally impressive temperate counterparts remain poorly understood,and it remains unclear whether tropical and temperate rainforests have fundamental similarities or not.Here we use new global data from high precision laser altimetry equipment on satellites to reveal for the first time that across climate zones ‘giant forests’ are a distinct and universal phenomenon, reflected in a separate mode of canopy height (~40m) world-wide. Occurrence of these giant forests (cut-off height > 25 m) is negatively correlated to variability in rainfall and temperature. We also demonstrate that their distribution is sharply limited to situations with a mean annual precipitation above a threshold of 1500 mm that is surprisingly universal across tropical and temperate climates. The total area with such precipitation levels is projected to increase by ~4 million km2globally. Our results thus imply that strategic management could in principle facilitate the expansion of giant forests, securing critically endangered biodiversity as well as carbon storage in selected regions 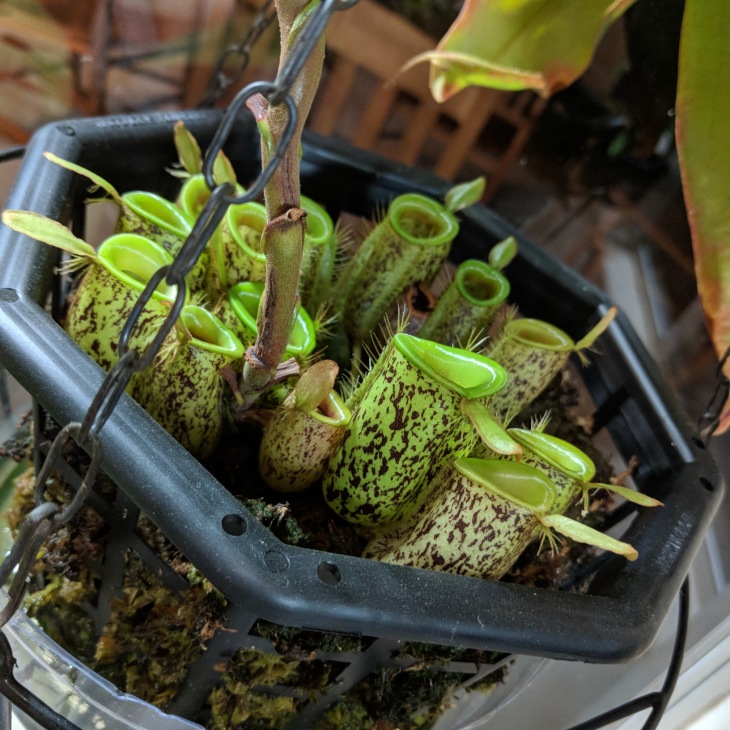 This is my most unusual plant. It is a lowland, swamp loving Nepenthes that was a carnivore and has switched to a detritivore diet. Though they don’t mind an occasional bug. The pitchers have enzymes and bacteria to break down and digest leaves, insects and insect larvea. The pitcher fluid is more basic than is found in other Nepenthes. Many insects will make homes for themselves in the pitchers.

I started with a batch of seeds I purchased on eBay. The first couple years growth is very slow, they make up for it the third year.

They are native to the rainforests of Malaysia and Indonesia. You’ll often see them at food stands, the pitchers stuffed with rice. I’ve also seen them called ‘monkey cups’.

In Malaysia a tea made from the roots is used to treat dysentery.

Keep them warm 60’F-80’F humid, wet and out of direct sunlight. I’ve done best growing them in orchid baskets full of sphagnum moss. I seat the baskets in a clear pot and keep an inch or so of water in there. Only use distilled water, they are sensitive to chemicals in drinking water.

Nepenthes ampullaria are most strongly related to Bicalcarata. Ampullarias are most easily identified by the tiny, narrow lid on the pitcher. There is a large variation in pitcher size, colors are solid green or green speckled with red.

Some leaves do not have pitchers, but instead grow tendrils. 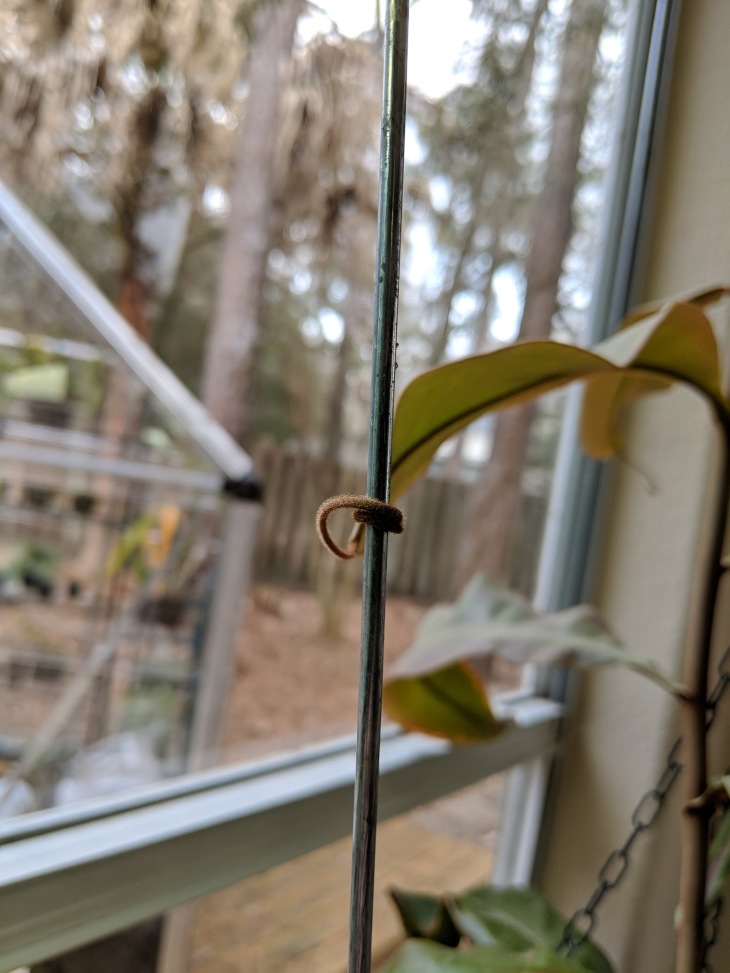 The fluids of Nepenthes pitcher plants are habitats to many specialized animals known as inquilines, which facilitate the conversion of prey protein into pitcher-absorbable nitrogen forms such as ammonium. Xenoplatyura beaveri (Diptera: Mycetophilidae) is a predatory dipteran inquiline that inhabits the pitchers of Nepenthes ampullaria. Larvae of X. beaveri construct sticky webs over the fluid surface of N. ampullaria to ensnare emerging adult dipteran inquilines.
…
Our results show that a terrestrial, inquiline predator can contribute significantly to nutrient sequestration in the phytotelma it inhabits, and suggest that this interaction has a net mutualistic outcome for both species.