In west Houston, near Hobby Airport, and even as far north as Spring you’ll find wild peacocks.

The blue peacocks are native to India. Some claim they were brought here in the early 1980s, but I’ve found references and photos of peacocks in Houston as far back as 1898. The commanding general at Fort Sam Houston liked peacocks and they could frequently be seen around the quadrangle. Sam Houston specifically requested there be no peacocks brought to his place in the mid 1800s.

Texas monthly in Feb 1975 mentions Vargo’s on Fondren as a place to see “azaleas, a large lake, swans and peacocks”. So perhaps, peacocks and Houston go back a long way?

Much like geese, peacocks can take a dislike to a specific person whom they’ll torment every chance they get. Like geese, they leave a mess in any space they frequent. Mostly they are enjoyed and loved by the locals.

Female peacocks are called peahens and are not as colorful as the males, but they are able to fly better (not having to drag the long tail behind them ). Peafowl refers to both male and female peacocks.

I’m lucky enough to live by Jones State Forest which has a population of the endangered Red Cockaded Woodpeckers. It was too cold today to go out to try to catch some photos but I learned quite a bit about them today.

They carve out holes in live pines to build nests. Mom and dad mate for life and split the childrearing. The rangers at the forest help them with prefab nests inserted into holes in trees. Notice the flashing around the hole to maintain the size and the screening underneath to give wayward chicks something to hang onto.

Some birds can see magnetic fields like we see colors. Those with sharp vision see the field clearly, those with impaired vision have trouble same as we might reading small print in our later years.

Some birds can sense the Earth’s magnetic field and orientate themselves with the ease of a compass needle. This ability is a massive boon for migrating birds, keeping frequent flyers on the straight and narrow. But this incredible sense is closely tied to a more mundane one – vision. Thanks to special molecules in their retinas, birds like the European robins can literally see magnetic fields. The fields appear as patterns of light and shade, or even colour, superimposed onto what they normally see.
Katrin Stapput from Goethe University has shown that this ‘magnetoreception’ ability depends on a clear image from the right eye. If the eye is covered by a translucent frosted goggle, the birds become disorientated; if the left eye is covered, they can navigate just fine. So the robin’s vision acts as a gate for its magnetic sense. Darkness (or even murkiness) keeps the gate shut, but light opens it, allowing the internal compass to work. Read more Robins can literally see magnetic fields, but only if their vision is sharp

More information:
Robins can see magnetic fields, but only in one eye
Magnetoreception of Directional Information in Birds Requires Nondegraded Vision (paper $) 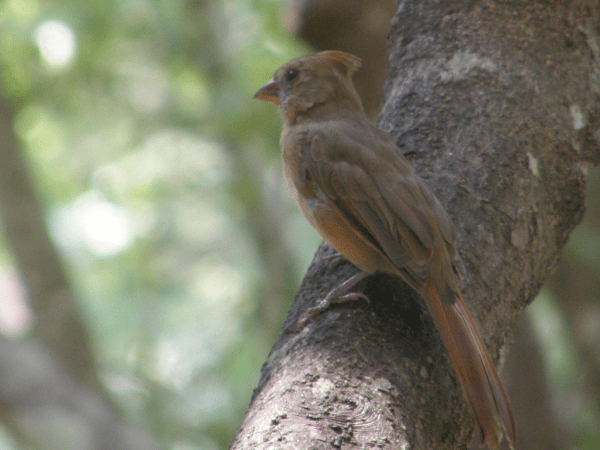 Back yard photos, The Woodlands, TX

These guys are interesting. He’ll sit at the feeder flicking all the sunflower seeds on to the ground while digging for nuts or fruit. He’ll also run up and down the fence or trees making a ruckus when the feeder gets low.

Back yard photo, The Woodlands, TX