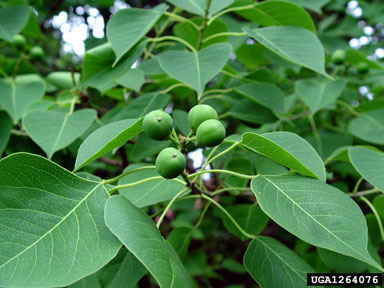 I know every year I’m here in The Woodlands I see more and more tallow trees appearing in parks and other wooded areas.

A study by a USDA Forest Service Southern Research Station scientist shows the numbers of nonnative Chinese tallowtree in Louisiana, Mississippi and east Texas grew by about 370 percent over a 16-year period. The spread of the invasive plant may create problems for plants and wildlife along the Gulf coast.

Tallowtree is a deciduous plant with heart-shaped leaves that grows to 60 feet in height. It invades stream banks, riverbanks, and wet areas like ditches as well as upland sites. Large seeds containing oil are spread by numerous large bird species. The tree is native to China and was introduced to South Carolina in the 1700s. There are approximately 457,000 acres of tallowtree in nine of the 13 southern states. Experts say tallowtree can change the chemical properties of soil and alter the composition and structure of native plant communities. Additionally, litter from the plant may alter habitat in invaded wetland areas, which could affect some frog and other amphibian species.

Jim Miller, a Forest Service ecologist and leading expert on invasive plants in the South, says the expansion of tallowtree in Louisiana, Mississippi and east Texas could adversely affect flora and fauna along the Gulf of Mexico and beyond.

“This is the first report to show how infestations are composed of thousands of small stems per acre that tightly grip lands in a near monoculture, excluding diversity with little potential for wood resource value,” said Miller. “The crisis is worsened by the plant’s rapid occupation of the highly diverse wetland prairies and marshes in east Texas and Louisiana, which are special habitats for many rare plants and animals and often productive native grasslands.”

Tallowtree is moderately difficult to control, but Miller says there is a new herbicide that targets the species specifically and leaves most other native trees and plants unharmed. He says landowners can help prevent the spread of tallowtree by not purchasing and planting the tree for ornamental or other purposes. Miller encourages landowners who already have tallowtree on their property to remove the tree and replace it with native species. He says landowners can work with a consulting forester to develop a control or prevention program if the species threatens to spread onto a landowner’s property. Miller believes organization of a coordinated tallowtree management program among impacted states is needed to safeguard the biosecurity of southern and eastern forests.

Miller believes the rapid spread of tallowtree poses a serious threat to the diversity and productivity of the South’s forests. He says as temperatures rise because of climate change, the probability of tallowtree moving farther north increases. Miller adds that bird-carried seed and ornamental plantings by unsuspecting homeowners will likely contribute to the northward spread of tallowtree. source

Invasion of tallow tree into southern US forests: influencing factors and implications for mitigation