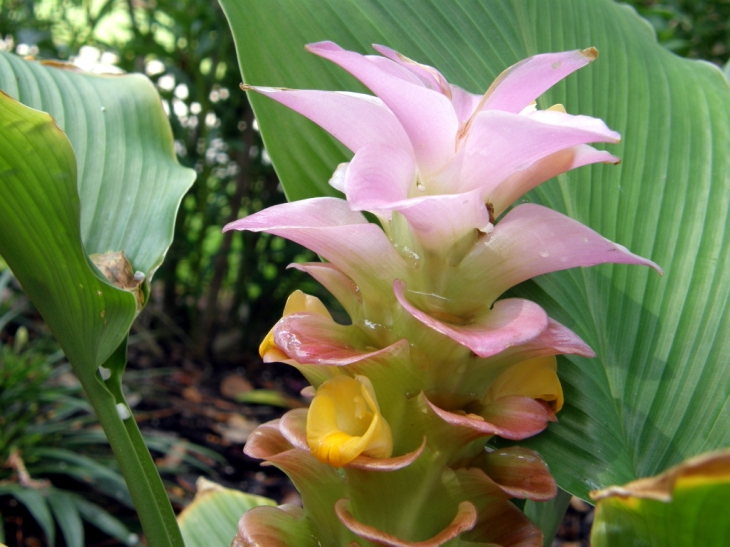 I’m new to growing gingers. But I’ve been very happy with the results so far. I planted several different species this spring and they all seem to be doing well.

The curcuma flowers are the most showy of the gingers I have. The leaves of these gingers are wider and are all curcumas have heavily ribbed leaves. Plants can reach up to 4′ tall once established.

Some curcumas flower in the spring, mine are summer bloomers. Leaves appear first, followed by the flowers. They are often referred to as the ‘hidden gingers’. Flowers are white, pink or some combination of both. What we consider the flowers are actually the brachs, or colored leaves around very small, nondescript flowers.

Curcumas will die back to the ground in the fall. Just cut the stems back to ground level, they will come back when the weather warms up.

Curcumas, like most plants, prefer well drained, high humus soil. They do best with regular watering and fertilizing. However, they want to be dry in the winter during the dormant season.

Like most gingers curcumas want part shade at least and can do well in full shade.

Propagate by division in the spring. Gingers can also be grown from seed, but on curcumas only the seeds on the low flowers are fertile. Division is a much easier way to propagate your plants anyhow. It should also be possible to root from stem cuttings. I haven’t tried yet.

Drought tolerant and freeze tolerant. Will bake in full sun, give it some shade.

Problems:
If soil is not well drained, plants may rot over the winter.
If you are not getting blooms you need either more sun or more fertilizer.
These are often slow to reappear in the spring, try not to panic.

Curcumas are part of the turmeric family. We have records from 200 BC of ginger being cultivated and used in cooking. In the 1970s ginger first became popular among the masses.