Skip to content
August 15, 2008May 16, 2018 Posted in Plants in Houston, Shrubs and Trees, Specific plant information 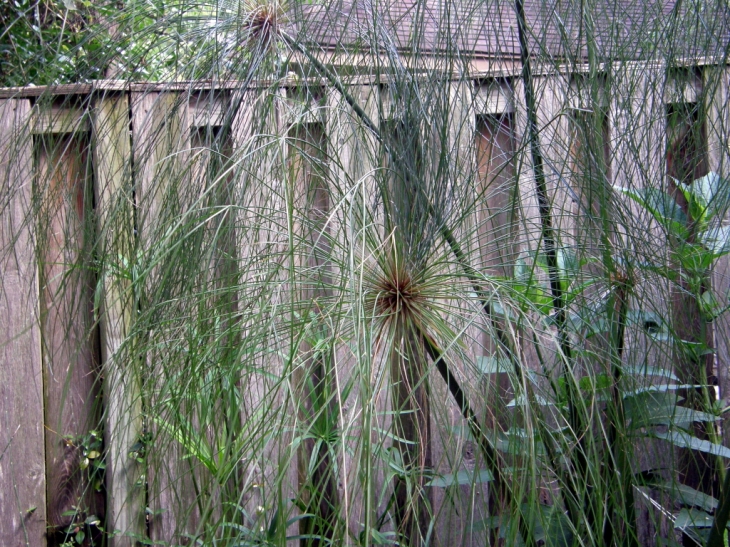 I thought I had already covered this plant or I would’ve gotten pictures before everything else grew up around it. This is one of my favorite plants. I had it out front in the swale garden but when ever it got windy I’d lose several spikes. So now it is protected by the fence and other plants.

While young you’ll want to stake this plant, and plant it somewhere it will get some wind protection.

Papyrus is a water plant. Plant it in a bog, shallow pond or area that stays wet.

It’s not mentioned in any of my garden books and that’s a shame. It is totally cool looking, grows where nothing else will, in wet clay and has been pain free. Other than cutting back broken stalks after windy days I’ve done nothing to it. And no stalks have broken since I moved it near the fence.

The stalks are about 10′ in height. Each year the new ones are taller than the previous years stalks. The heads are about 12″ across on the taller stalks. The umbles ( flower heads ) on the end of the stalks turn brown in the winter, but most re-green up when the weather breaks.

Keep it wet and it will thrive and spread. I find it tolerates occasional dry spells.

I found many of the stalks would tip over and have to be cut back or staked, it got to be a pain so I took it out.

Around 4000 bce it was used to make a paper like substance and one of Egypt’s main exports.

It’s hard to find at the nurseries, if you are looking for a plant try the online pond plant stores.

Trader Joe’s is a great place to pick up an inexpensive blooming orchid. The local one always has a nice selection. All the local garden centers are full of Christmas stuff