Skip to content
May 5, 2008February 15, 2018 Posted in Plants in Houston, Specific plant information 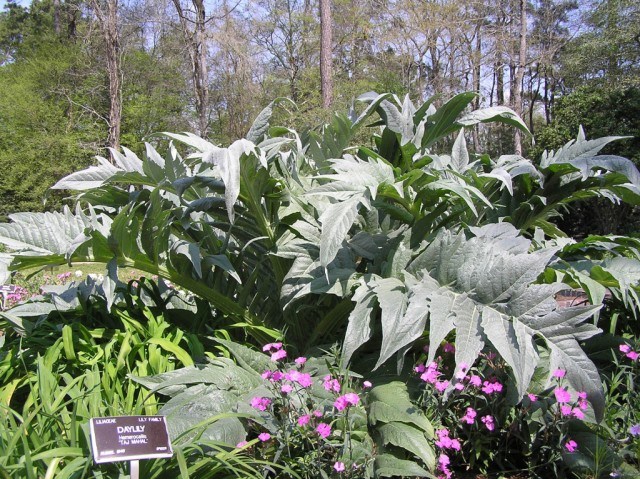 I bought one as an impulse buy at the Conroe Extension Office sale. I’ve seen it at Mercer several times. Every time I see it, I think ‘what is that thing?’.

While it looks unimpressive now, it’ll reach about 3′ tall x 3′ across probably this summer. It mounds much like a hosta and sends up tall flower spikes that will be covered with small white flowers that have purple bracts. I’ll post more photos late summer and as soon as it blooms. Flower spikes can be 6′-8′ tall and will last several weeks. Flowers are white and or purple and it will bloom anytime from late spring into early fall. Flowers are great for cutting and will last a long time in a vase. But it is the foliage most people grow it for.

The large leaves and size of the plant make it feel ancient and tropical. It has spikes of a sort you’ll want leather gloves on to trim it. Acanthus is Greek for thorn, and Mollis for soft.

Bear’s breech will grow in full sun to part shade and prefers moist, rich soil ( don’t they all? ). It will tolerate any soil except constantly water logged soil. I’m told it also grows very well in dry areas like west Texas. I find this one wilts when the soil gets dry, that may change after it settles in some.

When I first put it in the ground it sulked and played dead for a few days before sending out a batch of new leaves. I don’t think this plant is fond of being moved, so choose its location carefully.

If you decide you don’t like it it can be difficult to remove. People who report trying to remove this plant tell horror tales of digging and sifting through dirt 2′ deep and a 10’x10′ area. Fallen leaves will root where they fall. It also sends out roots that sprout new plants.

The leaves of this plant are the ones you see carved in ancient Corinthian columns. The leaves are considered a symbol of immortality. It was used as a funeral plant and then in the Middle Ages it became a symbol of Christianity.

This plant is evergreen in Houston.

It is a plant people either love or hate.

I’ve planted it in a part shade, fairly dry area in the hope it will do well but not invade the place.

Propagate by division in the fall or by seed.

First one died, planted a second one. Survived the drought and extreme heat of 2011, little to no growth