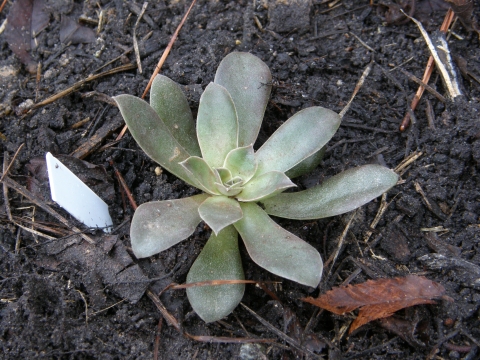 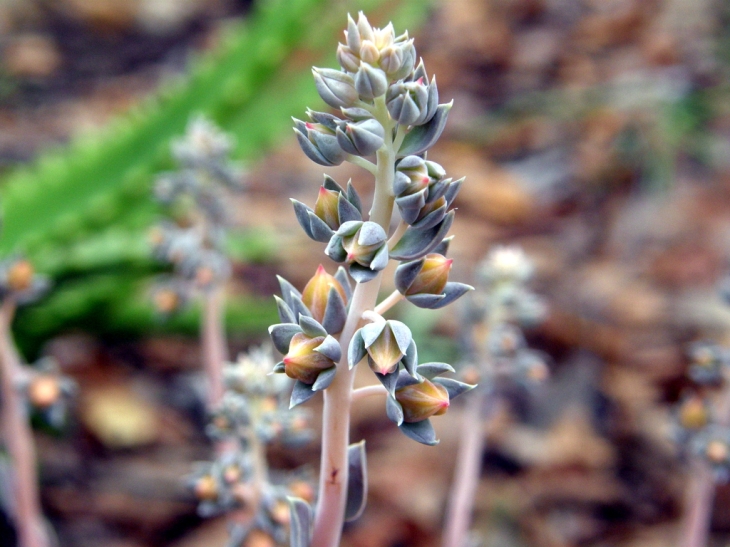 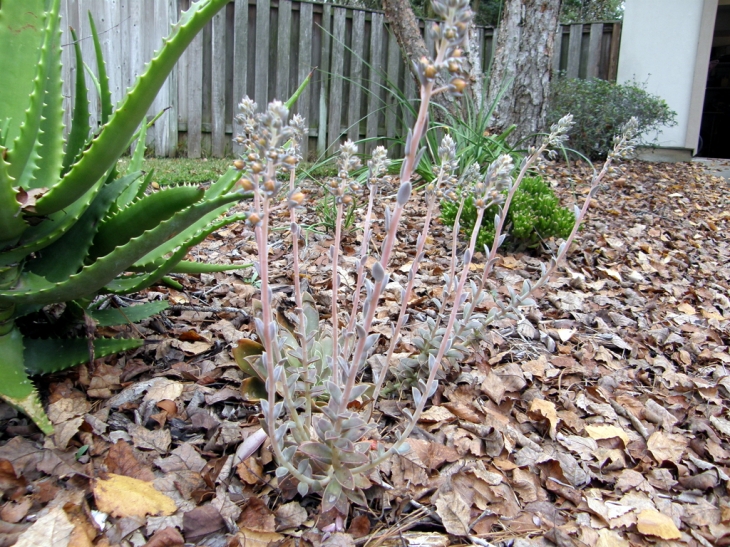 This is another sun loving, water hating succulent from Mexico. . I put some in a pot outside and forgot about them and it grew over the sides and escaped. It was so cool I divided it up and planted some in the ground. Keep people from touching it, it will mar the leaves. They do well under fluorescent lights making them a good office plant, but will need some sunlight to flower.

Echeveria are not supposed to survive Houston winters, yet it has done just fine, including surviving several hard frosts last winter.

Echeveria flowers will come on long stems a foot or more rising from the middle of the plant. Blooms usually come between Thanksgiving and Christmas and last until the first frost. Mine have all bloomed red and or yellow. I’ve not seen any other colors.

In the summer they prefer regular watering , not only did they survive a wet summer but they grew fast and long. They did get scraggly looking but are refilling out in the drier weather. They can do well in the shade as well just keep an eye on the water. Lower leaves can be lost in the winter and while it won’t harm the plant it may make it less pretty. Drought tolerant once established.

A rule of thumb says silvery plants do not do well in humid climates. The little hairs/fuzz that makes them silver are there to help them retain more moisture in dry climates. These seem to survive even Houston humidity.

Echeveria propagates much like a spider plant, new rosettes form on long stalks that drop to the ground to allow the rosettes to root.

Died during the summer 2011 drought and extreme temperatures. I liked them so much I started a new batch in the fall of 2019. These are closer to the house which might help protect them in colder winters.

This plant was only recently discovered in 1974.

All in all it’s survived being drowned for months, frozen, neglected, baked in the sun, left with out water for weeks, and 80% humidity. It’s an excellent choice for small difficult areas.

See also:
Peter Lapshin’s succulent site has a ton of pictures if you are looking to figure out exactly which Echeveria you have

The big freeze is over.

The leaves are browning up on the cold sensitive plants. The best thing you can do now is wait.

Once you see new growth you can trim and cleanup plants. After a hard freeze many won’t return until summer. Be patient.

Some will return from the roots. Fruit trees, roses, many other plants are grafted on to hardy root stock so you many not end up with the same plant.