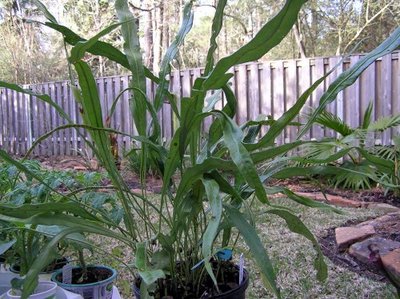 While these are common in Europe they are rare in the US. Unusual in that the fronds are all one section, they are still a fern.

The backs of this particular fern has an unusual pattern of dots that are velvet like. This is where the spores are forming.

Plant them in a damp, shady area and you shouldn’t have to do anything else. They should just grow for you. They will grow in the sun, but growth will be stunted.

As with most ferns keep the soil moist. I thought this died in the drought of 2009, but it re-appeared when the weather cooled and the rain started again.

It tends to look scraggly more often than not, perhaps it’s not something you want in a front garden?

This plant is vanishing from the US so grab it if you see it in a nursery and plant some. The more it gets planted the more likely it is we’ll bring it back off the danger list.

Things to watch for on ferns:

Leaf scotch: appears during dry, windy weather.  Water frequently and deeply and provide what shade and shelter you can.

Scale: looks like small brown bumps on stems and underside of leaves.  I use orange oil.

Mealy bugs:  Looks like white fuzz on plants.  I just wash them off with a garden hose.

Barely surviving the drought and heat of summer 2011

It’s mid April, most plants are coming back.

I too have noticed the over sized foliage on all the perennials. I’ve dug and dug and not been able to find anything other than it’s a combination of drought and freezing stress that causes it.  If I find out more I’ll let you all know